BUDDY NIDEY – Many federal workers have wondered if a date has been set for the new withdrawal rules for the Thrift Savings Plan.

The TSP Board announced recently that new withdrawals options would become active starting September 2019. The changes were in response to investors moving their money from the TSP to IRAs after they left their government job because the TSP had a limited number of choices to pick from. The TSP would have to revisit rules, rewrite forms, upgrade computer systems, etc.

Some additional changes that retired or separated investors will have to include the allowance of making monthly, quarterly or annual withdrawal, stopping and restarting the withdrawals and choose where the money can be withdrawn from either their Roth or traditional balances.  Anyone working past the age of 59 ½ could make up to four withdrawals without incurring a tax penalty each year. Right now, they are only permitted one withdrawal in their lifetime.

Kim Weaver said the idea was to phase the various aspects in but wasn’t leading to any time-saving benefits. She said, in the end, the TSP Board decided on an official date to implement all aspects of the law.

Weaver said she knows participants want it sooner rather than later, but this was as soon as it could be pulled off.

If you decide to quit or retire from your federal job, the Internal Revenue Service requests that you take out some of your TSP beginning the year you turn 70 1/2. This is called the required minimum distribution, which is based upon the average life expectancy.

If you fail to withdraw or allow for monthly payments to begin, the plan must ensure there is a required distribution before April 1 of the next year. If you go with the withdrawal option, the TSP looks at the amount being paid to you as being the minimum distribution. The TSP will let you know how much your minimum distribution payments will be.

Be aware that the required minimum distribution is taken from both the Roth and traditional balance if you have both of them.

If you continue working after 70 1/2, MDR won’t apply to the money in the TSP but will apply to other tax-advanced plans like IRAs. I

If you do not take the required distribution amount, you will be subjected to a 50 percent penalty on the amount you should have withdrawn.

As Certified Public Accountant and a graduate of the College of Financial Planning in Denver, Colorado, Buddy Nidey applies his strong analytical background to his work as an investment advisor representative. He enjoys coordinating clients’ investment portfolios with solid financial planning that takes income taxes, diversification and safety into consideration.

Other Articles from Buddy Nidey:

How does Divorce Affect your TSP? 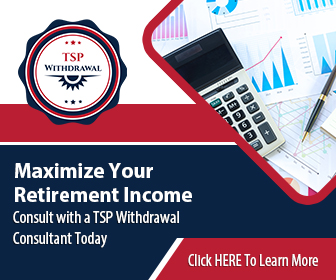